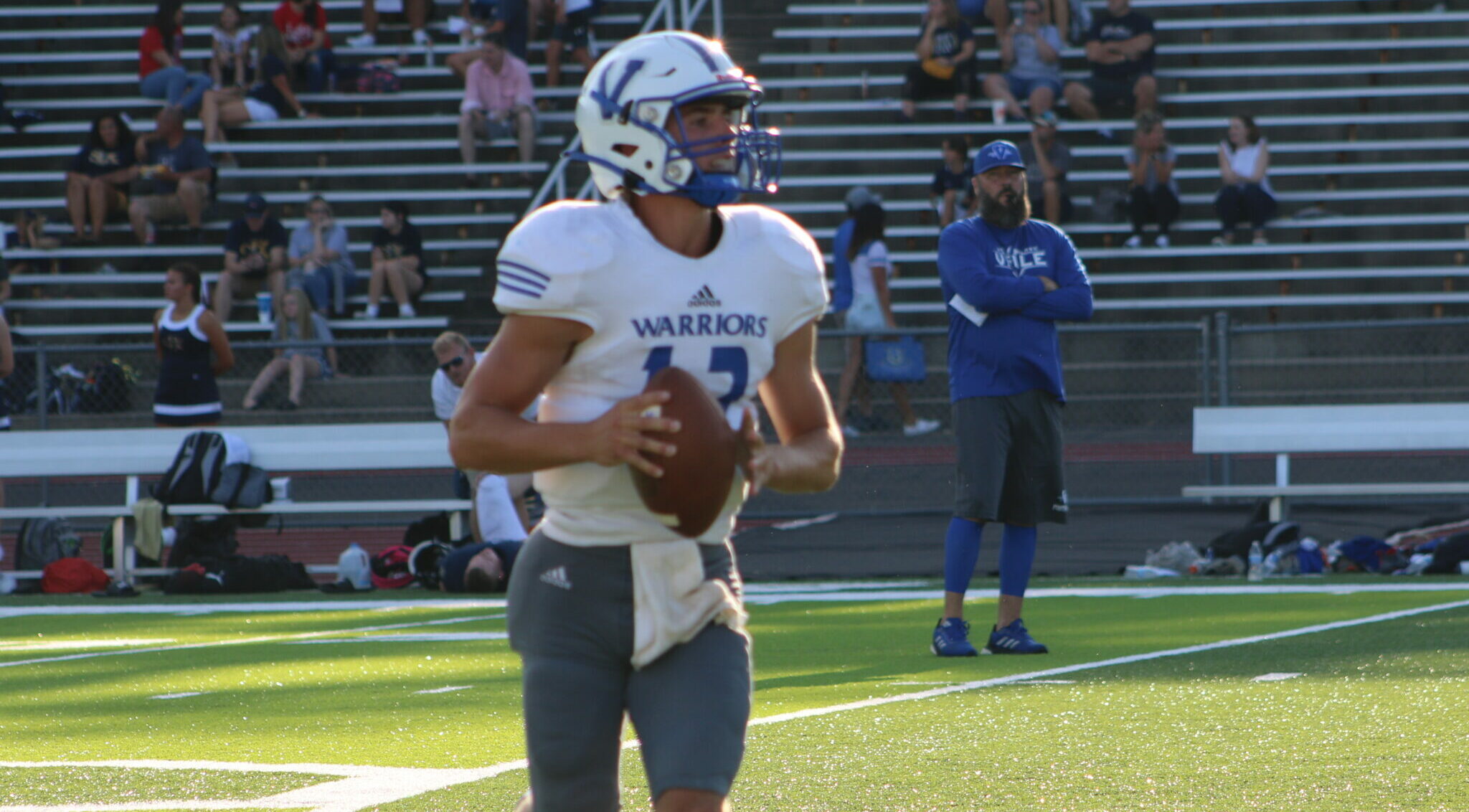 The Valle Catholic Warriors Varsity Football team opens their season with a dominant 50-14 victory over the Skyline Tigers. Valle takes on their cross-town rival, the Ste. Genevieve Dragons, next Friday, September 3rd at 7 pm.

The Valle Catholic Warriors Football team is back in action and they wasted no time picking up their first victory. They blasted past the Skyline Tigers 50-14 on Friday and started their season 1-0.

“It felt great to get back on the field,” Chase Fallert said. “Nothing compares to being on the field with my brothers on a Friday night.”

Fallert played a huge role in Valle’s dominant ground game on Friday night. The team ran up and down the field, especially in the first half, as they outscored Skyline 26-0 in the first quarter. The Tigers did manage to put a touchdown on the board in the second quarter, but they still couldn’t keep up. Valle put 18 more points on the board and went into the half ahead 44-0.

The warriors ran for a whopping 415 yards in the first half alone. They also passed for 101 yards.

“The [offensive] line did a phenomenal job tonight,” Fallert said. “Our run game was there the whole night and I think that was a big part of our success.”

The dominance continued into the second half. Skyline found a way to score once more in the third quarter but they were silenced after that. Valle only scored one more time in the fourth quarter, but was able to maintain their huge lead. The Warriors rushed for 164 yards in the second half which gave them 579 for the game. Valle secured the 50-14 victory.

“It felt amazing to get back on the field with my team after a long hard offseason together,” Aiden Heberlie said. “The reason for our win tonight was most definitely our offensive line. They played amazing and gave our running backs huge holes all night.”

Heberlie caught three passes from Chase Fallert for 56 yards and the team’s only receiving touchdown. He also pushed across a two point conversion. Giesler and Carson Tucker each caught one pass as well.

Valle’s defense complimented their high powered offense perfectly. They flew around the field and made plays throughout the night. Tucker led the team with eight total tackles and had one tackle for a loss. Michael Okenfuss was just behind with seven tackles of his own. He was Skyline’s worst enemy all night. He picked up a sack, two tackles for a loss and forced a fumble. Tim Okenfuss had six tackles with one for a loss. Jacob Elbert and Isaac Roth both racked up five tackles. Roth also deflected two passes and had a 50-yard interception return for a touchdown. They held the Tigers to just 329 total yards and forced three turnovers.

All went according to plan for Valle Catholic on Friday night. There’s no question they are happy finally seeing all of the offseason work pay off, and are moving forward as a confident bunch.

“I think this team has great potential,” Chase Fallert said. “The sky’s the limit for this group.”

Though they are happy, the work is far from over. This is only week one of a long season ahead.

“My expectations are to get better every single game this season and make memories that will last a lifetime,” Heberlie said.

The Warriors next challenge will be their cross-town rivals, the Ste. Geneviève Dragons. Valle takes on the Dragons next Friday, September 3rd at Ste. Gen.