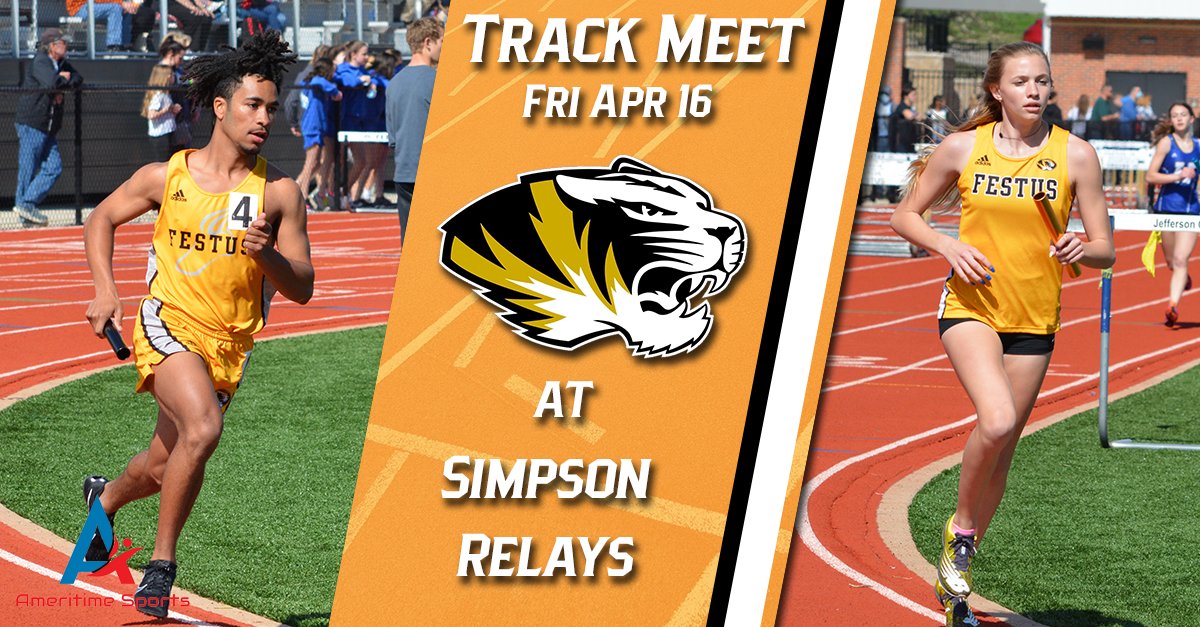 At the Simpson Relay Meet The Festus Tigers Boys Track team rack up 87 points and earn a second-place finish, while the Girls team also compete strong to bring in 68 points… good for a fourth-place result.

The Boys team results were particularly impressive considering some events weren’t even entered by the Tigers due to injuries. However, the the team continues to improve and hopes to have everyone back at full strength by Districts.

Boys Head Coach Chris Partney is optimistic about his team’s situation, and said, “We have three meets on the schedule between now and Districts: the DeSoto Invitational, Conference and the Hillsboro Invitational. The goal is to have everything come together by Districts and make a run at getting as many athletes through to Sectionals as possible.”

Arhmad Branch leaped 6.12m in the Long Jump to earn a Bronze Medal, and a Silver Medal in the Triple Jump with a distance of 12.56m.

Lukas Smith had a nice toss in the Shot Put of 13.68m to win a Silver Medal, and just missed medaling in the Discus, coming in fourth with a throw of 37.61m.

Aidan Grant won the Javelin event with a throw of 44.00m to bring home a Gold Medal.

Partney was pleased, and commented, “We had some very nice performances on the track and in the field. Many athletes are starting to make the gains that we’ve been wanting to see.”

In the Girls meet, the team took some chances and made some moves to try out different athletes in events. Girls Head Coach Wesley Armbruster said, “We used Friday night to shake up our lineup after some tremendous performances on Tuesday night at Tigertown. We left Friday night pretty happy with our week. In total, 37 new individual personal records were established last week and we set new season’s best performances in all four relays.”

Ella Shy continued to impress with a second place performance in the Pole Vault. She vaulted 2.74m. Sophie Nolen took fourth in the event with a height of 2.59m. Armbruster was high on his vaulters and said, “The pole vaulters continue to take care of business this year. Nolen and Shy are both consistently clearing 8’6″ and we expect Abbie Rogers to join them this week.”

Then, Nolen jumped 4.56m in the Long Jump to earn a Silver Medal, which was a new personal record for her.

In the 4x200m Relay, Festus placed second with a time of 1:52. The team also took second in the 4x100m Relay with a time of 53.67. Armbruster liked what he saw and said, “It was the first time we have put together the relay team of Kinsey Benack, Gabbi Burkard, Presley Perry and Alexis Biehle. They didn’t disappoint. Their 1:52 time was the best mark of the season for us and we think they have plenty of room for improvement over the month.”

Dari White ran the 3200m event and came in third with a time of 12:13. Armbruster noted, “White continues to lead our distance squad. She was on fire last week, setting new personal records in the 1600m, 800m and 3200m. We’ve been waiting for these kinds of performances from her and believe she is just beginning to scratch the surface of what kind of career she could have here at Festus.”

Said Armbruster, “In all, we are excited about where we are right now as we begin to look forward to the JCAA Championships next week. We expect the Girls team title to be a tightly contested race and we hope to be in the conversation throughout the meet. The depth and quality throughout the conference is as deep as it has been in a long time.”

The Festus Track team will be back in action on Friday, April 23rd, participating in the De Soto Invitational Meet.